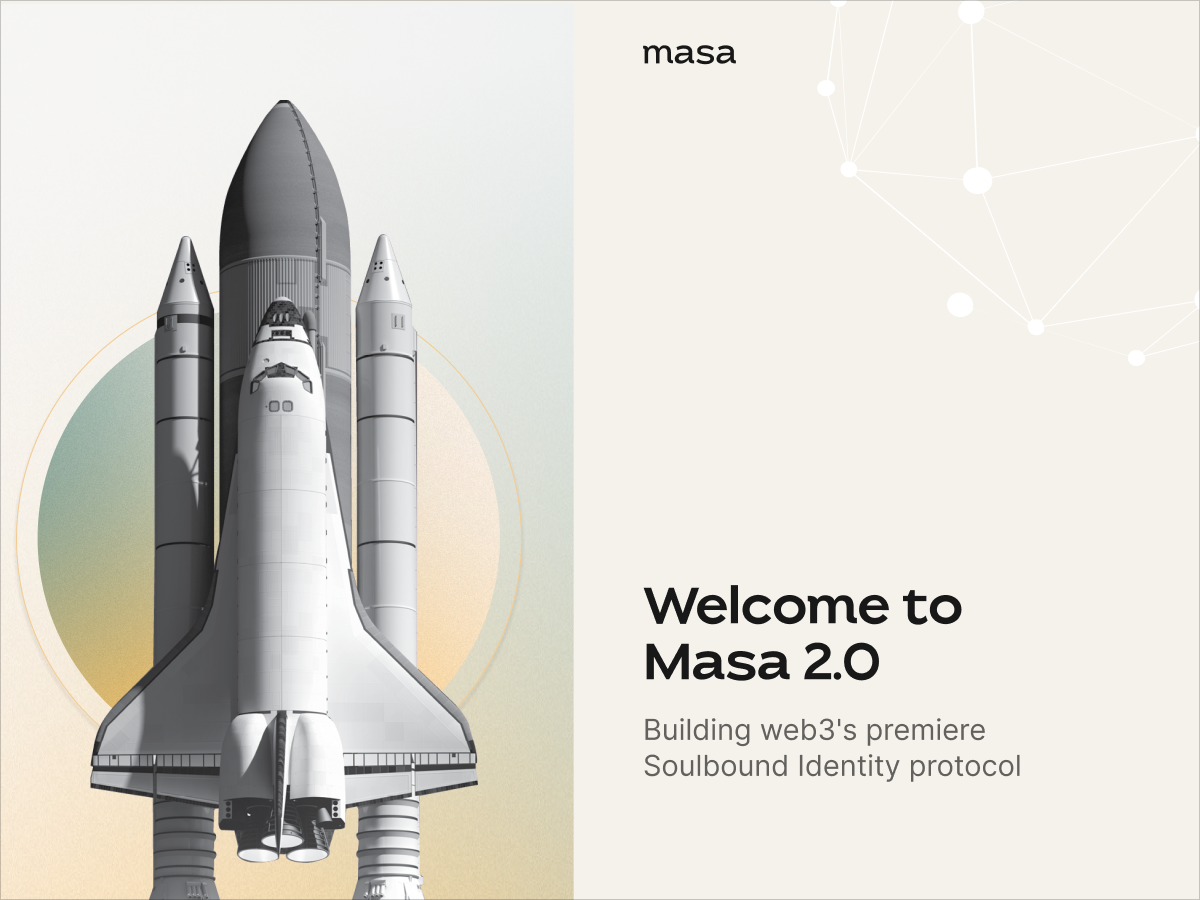 We're excited to share the next phase in Masa's evolution as the standardized protocol for Web3 identity.

Masa was founded with the mission to unlock access to on-chain capital globally. Founded by immigrants and built by a globally decentralized team, we firmly believe that economic opportunities should not be restricted by where you were born or where you live.

In our initial 1.0 product, Masa was building a truly decentralized credit bureau. Bringing together 10,000+ web3 and web2 data sources and providing individuals, businesses and developers with tools to access credit on-chain. As we were building a more equitable global credit bureau, we realized that an even more foundational primitive is missing in web3: identity. Simply put, there was no standardized web3 identity protocol to easily aggregate, attribute, and permission (credit) data on-chain.

In May, Vitalik published a paper called

, which envisions how Soulbound Tokens (SBTs) — publicly visible, non-transferable, non-fungible tokens (NFTs) — can serve as a web3 user’s identity. We decided to externalize the SBT infrastructure we had built for web3 credit reports and zoom out to an evolved focus on identity management.

It has become clear to us that in order to onboard the next billion users, web3 urgently needs a composable, user-friendly, and privacy-preserving way to manage on-chain identity.

We are paving the way for the first standardized soulbound identity protocol in web3. Soulbound Tokens bridge the gap between user activities, personal information, authentication, and permissioned sharing. We use SBTs to represent users' attributes in web3 and in the real world, enhanced with a protocol-level abstraction that enables the full management, attribution and permission of SBTs. With Masa, metadata attributed to a soulbound token is encrypted and can only be accessed with permission from the identity owner through the Masa Protocol.

With Masa 2.0, we are the first to build bridges to support people all over the world to access the new web3 economy through Soulbound Identity. As we empower users and developers with Soulbound Identities across the globe, we start laying the bricks for a future decentralized society.

To learn more, here are 8 things you should know about Masa Soulbound Identity.

SBTs are designed to be the intersection between our unique identities, technology, and how we interact within a decentralized society. They are publicly visible, non-transferable, non-fungible tokens (NFTs) that can serve as a web3 user’s identity that is intrinsically tied to their owners.

What are the main Masa Soulbound Identity use cases?

You can now use your .soul name to unlock a wide variety of web3 use cases:

What is a .soul name SBT?

Web3 wallets have become the tool to unlock DeFi but there is a missing piece, Identity. Lack of identity leads to risk with an inability to verify the authenticity of users. Masa Soulbound Identity fixes this by bridging the gap between your wallet address and one’s own identity, while protecting privacy, and ensuring you maintain autonomy and control. Your .soul name is a unique domain name for your digital identity. Think ENS, but for your digital identity in web3.

What have been Masa’s key product launches to date?

Masa Devnet (October 2022): Select developers and projects can seamlessly integrate SBTs and Identity Management into web3 dapps through the Masa SDK. Select front-end developers can interact with the Masa Protocol through a boilerplate UI implementation of the Masa React SDK. Developers can access our v1 CLI and developer documentation. Read

SBT Single Sign-On (September 2022): Users can seamlessly sign-up or sign-on to web3 applications, while protecting privacy, and making it as simple as signing a transaction in your wallet. Dapps can authenticate against linked SBTs held in a user’s wallet. Read

How can developers and partners build with Masa?

To become web3’s premier soulbound identity protocol, Masa is striving to be the SBT infrastructure powering identity for the next generation of web3 projects.

. Starting November 2022, we will integrate and announce our partnerships with a wide range of web3 projects, servicing use cases across DeFi, GameFi, DAOs, NFTs, and beyond. Apply to join the

On Masa Devnet, developers and projects  can seamlessly integrate SBTs and Identity Management into web3 dapps through the Masa SDK. Below are the main types of SBTs we are able to support as of November 1, 2022:

A human-readable address – a domain name – that resolves to a person's soul - think ENS for SBTs. .soul names are a combination of letters, numbers, and/or emojis can be used to create a soul name ( for example, vitalik.soul). Soulnames can be purchased on the

. Masa is currently on the Goerli testnet only and will launch on the Ethereum mainnet soon.

The soul of a user's identity in web3. All attributes of a user's Soulbound Identity are linked and resolved through a user's Masa Identity SBT.

A web3-native credit score computed from a user's web3 activity on the Ethereum blockchain.

A token that represents a human verified challenge, for example; Masa Green - Phone verifies that the holder of the MG-P SBT is a unique user who has completed a 2FA authentication challenge with a unique phone number.

What is next for Masa?

As a premier identity protocol, Masa’s success is guided by the north star of SBT mints and API calls. We want to become the standard for web3 soulbound identity. Expect to see more Masa Soulbound Identity users; more use cases across DeFi, GameFi, DAO / Community, and user authentication; more developer and project adoption in the coming months.

Who is behind Masa?

, Masa is built by a globally decentralized core team and is supported by ~75,000 community members hailing from 40 countries. Masa is frequently featured on premier media outlets, events, and industry whitepapers. Catch us on

How can you get involved?

How to Register for the Masa Token Airdrop & .Soul Allowlist

*by entering your e-mail address you confirming that you’re agree to subscribe to our newsletter.

Masa is your web3 soulbound identity that unlocks access to decentralized credit and financial products globally.